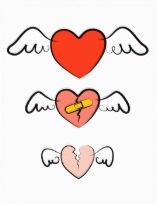 Here’s a comment from Tamara I thought was so great, I wanted to turn it into a new post. Thank you, Tamara!

Tamara’s comment:
“I can totally relate to this, especially the part about attracting critical men. All the men I used to date were very critical, until I realized how hard I on myself I can be. Once I started working on myself I started attracting nicer guys who treated me well.”
This is exactly how Rori Raye’s Circular Dating works! You can see the progression of how you’re doing on the inside by the men who are showing up in your life.

Suppose you’re used to attracting men who hurt you – if men keep showing up who want to hurt you, you know you’re not healed yet. But as the more “boring” guys start to show up, you’re getting healed!

They may not “light your fire” like the men who fit perfectly into your old relationship patterns, but the boring guys who don’t want to hurt you are a actually a HUGE step in the right direction!
I’ve seen this happen over and over again, especially in my own life. I used to only be attracted to men who were unavailable in some way – emotionally, geographically, logistically, you name it – and if a man was available and actually interested in a real relationship with me, I didn’t want anything to do with him.
At the time, the unavailable men were a perfect match for me in terms of where I was at emotionally. I was like a magnet for them because I was just as unavailable as they were!
The chemistry was off the charts because this is where we both felt safe – there was no chance for the risk of emotionally intimacy. I was fine with only taking crumbs from them because that’s all I could handle – I couldn’t tolerate being loved or experiencing true intimacy.
I mistook this highly addictive “chemistry” for love. I immediately wrote off all the men who were interested in a real, full-time relationship with me because I didn’t “feel it” for them – this superficial type of chemistry was not there. Meanwhile, I was getting my heart broken over and over again by the unavailable men. Each relationship left me more heartbroken than the last – leaving me even more hopeless, distrustful of men, and terrified of love.

I didn’t want to acknowledge how bad I was feeling about myself – it was as though I was going out and HIRING these men to hurt me.

Circular Dating opened my eyes to all of this, as I uncovered my relationship patterns and everything I was doing that was blocking love from coming towards me. Very quickly, I noticed that I was only attracted to the men who were “difficult” – the ones who were “too busy” for a relationship and I never knew where I stood with them – the ones who kept me on edge.
When I learned to stop chasing these men and ONLY spend time with the ones who’s energy was coming TOWARD me – that’s when everything turned around. I stopped making “instant chemistry“ a requirement and started paying attention to how I felt about MYSELF in their presence. As I started feeling better about myself, more and more high-quality available men started showing up!
Suddenly the boring guys became a lot more interesting to me! I discovered that REAL chemistry can be CREATED – by opening up my heart and experiencing a man loving me for exactly who I am.

7 replies to "Stop Getting Your Heart Broken – And Start Getting Love!"