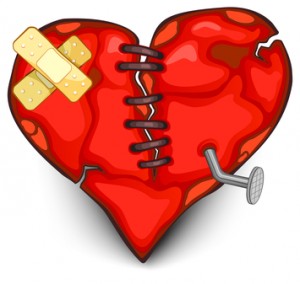 If you’re finding yourself continually feeling disappointed or heartbroken by men – you may actually be going out and “hiring” these men to hurt you.

It’s as though you’re going out and “hiring” a man to do this FOR you – you’re handing him a stick of your own low self-esteem and asking him to hit you over the head with it. I did this for so much of my life that I know that to be a fact.

If you’re with a man who’s making you feel bad – by saying mean things to you, not following through with what he says he’s going to do, not embracing you, or being abrupt – there’s no way on earth that’s going to feel good to you.

If you’re anything like I was before I turned things around, when a man makes you feel bad you might feel like it’s your fault – that you must have done something wrong – and you’re going to start beating yourself up.

I want you to know that he’s doing the job for you!

What you’re doing to yourself on the inside, that’s what you’re “hiring” a man to do to you on the outside.

Similarly, if you’re filled with anger and rage – but you’re “sitting on it” because you’ve been taught to be nice and not express anger – you’re likely going to attract a man who’s angry.

That’s when you feel released – because he’s expressing the anger FOR you.

It’s a system – it’s like two tanks sharing the same amount of water, with a hose in between them – if one tank gets low the other tank falls into it and fills it up. They flow back and forth.

So if you’re “depleted” in something, you’re going to be looking for a man to fill you up – so if you’re not expressing the anger you feel, he’s going to shove it onto you.

If you’re not in touch with your feelings – and fully experiencing them and loving them – you’re going to go out and find a man who will express those emotions FOR you. The same goes for your friends and the people you choose to surround yourself with.

So if you’re attracting and attracted to men who aren’t treating you well, the questions is – how are YOU treating you?

Take a look at your “nasty voice” – the voice inside your head that’s beating you up.

The best place to start is by forgiving that voice, embracing it, and loving it – and thanking it for trying to protect you.

When you do this, you’ll start to attract men who want to love and embrace you too!

If you’re ready to turn this around and stop attracting the wrong men (so you can attract the RIGHT one!), click here to listen to a free teleclass I hosted on this topic.