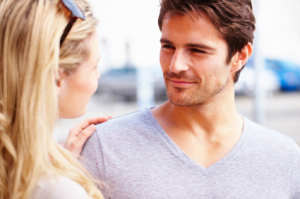 Here’s a great article by Rori Raye, my brilliant mentor and author of the amazing eBook, “Have The Relationship You Want”:

In your efforts to let a man know you’re interested in him, you might actually be blocking his ability to get close to you!

Find out why, and what you can do instead so that he naturally feels the urge to move the relationship forward.

Sometimes, we want so much to let a man we know we like him – and make sure he doesn’t slip away – that we act in ways that actually PREVENT him from getting closer to us. And we’re not even aware that we’re doing it.

Think about the last time you went on a first date. Were you so eager to make a connection that you armed yourself with a bunch of conversation starters, jumped in whenever there was a tiny bit of silence, or generally tried to keep the ball rolling with him?

How about when you’re starting to see a particular man more often? Are you the one suggesting another date, calling him, and generally trying to keep things moving forward?

What about when things start getting a bit more serious? Do you spend all your time thinking about him and ask him where things are going?

WHAT MAKES A MAN PURSUE

In order for a man to feel attracted to you and to pursue you, he has to feel “a pull” towards you.

There needs to be some tension and the actual SPACE for him to move forward into that space.

This is what we think of as “the chase.” And men enjoy the chase.

It makes them feel as if they’re consciously choosing you and winning something they worked for.

Unfortunately, what often ends up happening is that we like a man so much – and want to make sure he knows we’re interested – that we inadvertently push into him rather than create the space where he feels pulled toward us.

TAKING A STEP BACK SO HE STEPS FORWARD

To create that all-important space, you’ll need to shift from a mindset of “doing” to one of simply “being.”

You’re going to go against your usual impulse to make something happen with a man and instead simply allow things to unfold – which will naturally shift him into the “doing” role.

When you’re with a man, if you can allow yourself to simply “be” and resist the urge to take charge – even if it means dealing with some awkward lulls in the conversation – a man will actually feel more comfortable in your presence and will naturally feel compelled to come closer to you.

As things progress, the only thing you need to do to encourage a man to keep moving things forward is to show him how much you enjoy being with him!

That means that you’re fully present with him – fun, affectionate, and appreciative of him. When a man feels like he’s making you feel good, he will feel good himself. And it will keep him coming closer and closer.

Surely if you don’t call him, initiate plans with him, or give him little gifts to show a man how much you like him, he’ll think you’re not interested, right? Absolutely not!

A man who’s attracted to you and wants to see you will NOT drop the ball simply because you’re not always available to him or showering him with attention.

Taking a step back from a man and re-directing that energy and time back to you ALWAYS brings the right man closer.

Remember, a man can’t fall for you if there’s no space for him to sink into.

Create that space by taking a step back in your conversations, your relationship, and your “need to know” where things are going – and watch him leap forward to claim you as his one and only!

There are very specific things you can do to shift your vibe that will make you irresistible to a man. To learn more, click here to subscribe to Rori’s amazing FREE relationship advice e-newsletter.

Rori’s eBook and programs changed my  life and my whole view of relationships immediately. To check them out, click here and then click on “Program Catalog” in the top right menu.