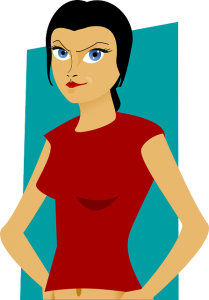 Here’s a question from Anne – who’s dealing with feelings that come up ALL the time in relationships, so I thought this would be helpful for everyone.
The Question:
Helena, I’m worried that my anger is ruining my relationship. I do SO much for my man, and then I get angry when I feel like the relationship isn’t moving forward. I end up exploding on him and it always turns into a fight. He’s a good guy, I just want to break this cycle before I push him away for good. Please help!!! – Anne
My Answer:
Anne – two things that accompany urgency in relationships are ANGER and RESENTMENT.
Anger and resentment lead to ATTACK. You either want to attack him for not giving you as much as you’re giving him, or you’re afraid he’s going to attack YOU by leaving you.
When this happens, your feelings of urgency, anger, frustration, and resentment are going to get BIG. And you’re not going to know how to let it out towards him – it’s going to be too late and you’re going to “explode on him,” just like you said.
One of the most important things to remember is this:

Anger and resentment build in direct proportion to the amount of energy and effort you’re putting out in the relationship.

In other words, you’re going to be angry with him if he doesn’t step up, because you’re putting out a lot of effort to “make” him step up or to keep the relationship going.
If you weren’t putting out all this effort – if you were just leaning back, focusing on yourself, and watching him – you wouldn’t be anywhere near as angry.
When you’re “waiting” for a man to move the relationship forward because you’re overly invested in him, you’re going to become angry and resentful.
When anger and resentment start building, you start to feel this sense of attack. That’s when the communication with him breaks down and you can push him away. This is where it all goes downhill.
So anger, resentment, and a sense of attack are all a result of working too hard in the relationship!

If you’re starting to feel angry or resentful – that’s a big clue! Instead of focusing on what he’s dong or not doing, you want to ask yourself right away, “Where am I putting in too much effort?”

Pulling back on the effort you’re putting out to make something happen in your relationship will make all the difference in the world for you!
Focusing that energy on YOURSELF instead will shift your vibe and make you much more attractive to your man.
Love, Helena

11 replies to "Anger And Resentment In Relationships"