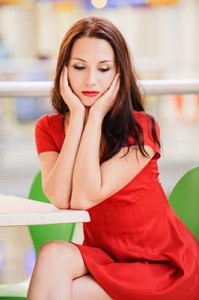 If you’ve ever found yourself constantly thinking about or obsessing over a man who’s not stepping up in a relationship – or even someone who’s not “there” for you anymore – I know exactly how you feel.
You may be wondering what you did wrong, or analyzing why you still love a man who’s not “there” or who’s not doing what he’s supposed to be doing in the relationship.
For now, forget about all the things you’re trying to analyze – you can really simplify all of this by noticing that he’s basically just “not there.”
For example, instead of wondering, “Why isn’t he calling me?” – just go with, “I’ve noticed he’s not calling me, THEREFORE he’s not really there.”
If you’re wondering why you’re obsessing over and hung up on man who’s not there – instead of going into “Why am I…?” – let’s just say you ARE, and let’s call it a HABIT.
Everything you’re doing now that’s not serving you – instead of analyzing it all to death – just call it a habit!

The beautiful thing about this is, that habit was created out of LOVE inside yourself!

On some level you’re deeply in love with yourself – and the parts of you that keep you entrenched in these habits are actually trying to save you, help you, and protect you – they just don’t always know how to go about it in the best ways.
It’s like your inner 2-year-old is trying to give you the gift of saving you from a dangerous guy, or from a boring guy, and you’re just beset with all these feelings, experiences, and inclinations.
So instead of asking yourself “Why?” – let’s just fix it!
The first step to turning these habits around is Awareness. Start by asking yourself these questions instead: Who am I? What are my patterns? What do I seem to keep doing over and over again? What do I want? What are my habits?
Rori Raye’s tool of Circular Dating will help you quickly uncover your patterns and habits – and help you get answers to some of these questions.

You need to be putting yourself out there, really learning and practicing the tools with every man you come into contact with. If you’ve been zeroing in on this ONE man, you haven’t been fully expanding into the whole world.

If your habit is “I’m in love with a man who isn’t there, and I think about him a lot” – what would happen if you changed that habit and you didn’t think about him? Then you’d have to ask yourself, “What should I think about instead?”
This is where “channeling” helps – go make a list of 20 things you could do that would completely engross you – listening to music, going for a walk, cleaning out a drawer – just so you don’t think about him for 5 or 10 seconds.
If you do that all day long for a couple of days, where every time you think of a man who’s not there or not stepping up – instead of beating yourself up or doing what you’d normally, habitually do – you just do one of these other things on your list, what you’re doing is you’re building new habits!

You get triggered, and you go down the same “road” over and over again, without even thinking about it. It’s automatic – it may feel new, but it isn’t – so you’ve got to create some new “roads.”
Make a list of all the things you can do that will completely absorb you and stop you from thinking about any man that you shouldn’t be invested in because he’s not “there” or he’s not doing his job in the relationship.
This is your ability to create distance, which is just a space between him and you – where you can expand yourself and live without thinking about him.
So instead of analyzing anything, just say “I have habits that haven’t served me, and now I’m going to become aware of how they haven’t been working and how I’m experiencing the fallout of those habits – and now I’m going to bring my energy to NEW habits.”
The second you start thinking about this man, go take a walk or do something on your “channeling” list. All you need is 5, 10, or 20 seconds of not thinking about him to build a new pathway in your brain!
I’d love to hear what’s on YOUR “channeling” list!