What Makes A Man Feel Unsafe And Pushes Him Away 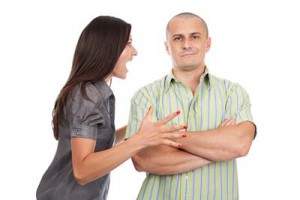 One very important thing a man needs to feel in order to fall (and stay) in love with a woman is SAFETY. He needs to feel that he can safely open up to you and be 100% accepted for who he is.

When you fight or try to solve problems when you’re feeling triggered, you can end up saying things you don’t mean and making a man feel unsafe around you, which can cause a LOT of damage in the relationship.

If you’re feeling upset, uncomfortable, or angry with a man – your first instinct may be to attack him. But attacking him, blaming him, making him wrong, or holding him responsible for your feelings is a surefire way to make him feel LESS attracted to you and push him away.

Even if you’re very carefully trying to sound like you’re NOT blaming him – if deep down you’re not taking responsibility for your own feelings – he can feel it in your vibe and he’ll feel blamed.

When a man feels blamed or attacked – he’ll either get defensive, attack back, or “shut down” on you. I know how incredibly frustrating this can be!

When you’re feeling triggered and your brain perceives a threat, the amygdala – your fight, flight, or freeze mechanism – in your brain fires off a distress hormone, which helps you to survive when you’re physically in danger.

When you feel triggered, your blood gets redirected to your limbs and you actually lose oxygen in your brain. This can lead you to make irrational poor choices in that moment.

This is why it’s never a good idea to fight when you’re triggered – it’s virtually impossible to communicate consciously in that moment. Your brain is not firing properly. It’s best to take a breath and a step back.

a) making a lot of noise (demanding that our needs get met), or…

b) going quiet (completely detaching and “shutting down” emotionally).

This is how power struggles and resentment build in relationships – and this can become the undercurrent of your interactions with a man.

This is what makes a man feel UNSAFE around you – which weakens the attraction and connection and pushes him away.

When a man “shuts down” or goes quiet on you, it’s easy to believe that he’s punishing you when he really isn’t.

If he starts protesting with disconnection, he’s alerting you to the threat to the relationship. If you react to the protest as if you’re being attacked (which most people do), you’ll start defending yourself as though your life is at stake.

Immediately going on the defensive only ESCALATES the conflict and disconnection you and your man are already feeling.

Even if you’re not doing this with words, you may be doing it with the “silent treatment” by shutting down emotionally – which is often just as damaging to the relationship because it makes a man feel UNSAFE around you.

Expressing Yourself In A Way He Can Hear is one of the Attraction Builders in my eBook, “Attract The Man You Want.” Click here to check it out!