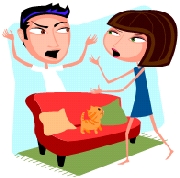 Many women unknowingly do things that push a man away instead of bring him closer when they’re going through a difficult situation with him.
For example, when a woman starts to feel a man pull away, she’ll often panic and do things that damage the relationship and weaken his attraction and connection to her.
This is how the cycle often runs:

A woman finds herself in a difficult situation with a man…

She tries to do what she assumes is the right thing, but it doesn’t work…

She then feels stuck and eventually panics – and does things that push him even FURTHER away.

It’s no surprise why so many women are leading a life of silent desperation in their relationships! When a woman drives herself crazy by analyzing everything to death and making the same mistakes over and over again, it can destroy a man’s attraction to her and do a LOT of damage in a relationship.
Here are two of the most common mistakes women make that push men away:

1. They try to convince a man of something.

2. When that doesn’t work, they try to argue their way into his head.

When trying to convince a man doesn’t work (and it never does) – many women resort to arguing or fighting, or perhaps even using blame and guilt to get their point across.

Most women feel that if they can just explain themselves or their point of view to a man, he’ll somehow “get it.” We all feel the need to explain ourselves to men at times – but it doesn’t work that way!

You’ll never make him understand you or your point of view by “drilling” your point into his head. The harder you try, the further he’ll pull away. We’ve all experienced this (myself included)! Here’s an example:

Let’s say your man is starting to get distant and you’re afraid he’s losing interest or planning to leave you. You first try to understand why he’s getting distant – but you can’t figure it out, and as a result you start to panic.

You try to convince him of what a great partner you are. When that doesn’t work, you might try to talk to him about it – or say things like, “I don’t know why you’re avoiding me. Why haven’t you called? Have you found someone else? I need answers.”

When that doesn’t work to bring him closer – and you’re STILL not getting the answers you need – your anxiety starts to turn into anger.

You feel that you deserve more from him, and you may end up saying things like, “I’m sick and tired of your distant behavior. I don’t appreciate you shutting down on me. I’m doing all the work in this relationship. You only care about yourself.”

This is a MAJOR mistake which can shake the foundation of a relationship and push a man right out the door.

When you use this approach, a man feels attacked – and his first reaction is to get even MORE distant to avoid confrontation.

It’s important to understand that you can’t “hold a gun to his head” to make a man understand you or give you the love, attention, and affection you desire. This is an utterly hopeless strategy that only pushes him further away. The good news is, there’s a MUCH better way!

Click here to discover the specific things you can do and say that will naturally make a man want to open up to you, give you all the love you deserve, and feel devoted to you for the rest of his life.