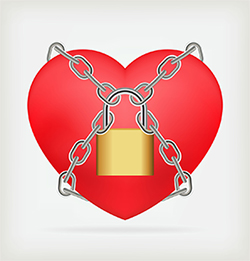 Click here to read Part 1 of this post.
Here are some more ways you may be pushing men away without realizing it:

Body Language is 93% of our communication. There’s a lot being said with your body – and the way you’re putting yourself out there is important because it communicates whether or not you’re open and approachable.
Many women have their “guard up” without even realizing it. They go out with a big purse that they hold in front of them the whole time, or they hold a drink in front of their body, or if they take off their jacket they put it on their lap or hold it in front of them – and it’s like they have an “armor” around them. I still have to remind myself not to do some of these things!

You also don’t want to be absorbed in your phone when you’re out in public. Cell phones actually disconnect you from the real world when you’re out there – they distract you and take you out of the moment. They allow you to “hide.”

A man won’t approach you if it looks like you’re busy with something else. If you’re somewhere where men could come up and interact with you, you want to convey with your body language that you’re open and approachable.

Try practicing this in low-risk situations – you want keep your energy open 100% of the time – so even if there aren’t any men around, you can still practice this and build up your tolerance to it.

These things are subtle but they make a huge difference! You want to demonstrate that you’re open by smiling and making eye contact with everyone who crosses your path. That energy in and of itself will put you in a place where you’re open and available to meeting someone new.

Many women have gotten into a habit of paying for half of the bill on dates. This is driven by our independent nature – we make our own money and we can buy our own things.

You may feel compelled to pay for your half of the bill to show a man that you can take care of yourself. Plus, you don’t want him to expect anything more from you, like sex. Here’s the thing…

Women often want to pay on dates because they don’t want to send the wrong message. The thing is, a man won’t arrange any activities on a date that he can’t afford, so you shouldn’t feel obligated to pay for half of the bill.

A good masculine energy man will WANT to take care of you and show you a good time – and may even feel offended if you try to pay when you’re on a date.

Paying on dates is one way women unconsciously try to control the outcome of the situation, which ends up pushing men away. You want to let go of control and expectations – and let him be the man.

Let him do things like plan the date, make the dinner reservations, and pick you up. This isn’t selfish at all – this is what masculine energy men WANT to do!

2 replies to "Are You Pushing Men Away Without Realizing It? – Part 2"