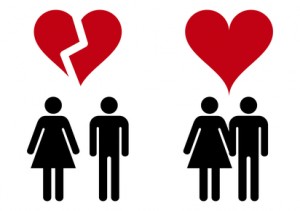 Although some people just aren’t meant to be together, some relationships ARE worth trying to repair. If you want to reconnect your broken relationship, you first need to determine whether or not this is actually in your best interest. Once you’ve made up your mind that this is something you want, read on to discover the first steps to reconnecting.
Have you ever had a friend whose best idea for how repair her relationship was to show up at his house with a home-cooked meal and a list of apologies – and you remember feeling embarrassed for her? So, now you’re in the same position and know exactly how she felt, but just because you can sympathize with her doesn’t mean you have to beg your ex to take you back!
The main reason so many of us are willing to do over-the-top things when trying to figure out how to reconnect a relationship is because those things would probably work on US. Think about it: gifts, love letters, persistent phone calls – even if those tactics are annoying, when they come from a man you once loved, they do get to you, don’t they?

Men, on the other hand, just don’t work that way. It may sound harsh, but your ex probably isn’t going to shed tears of remorse over your heart-felt love letter.

Instead, wouldn’t you rather have your ex come to you first, wanting YOU back? It’s not only easier, it also gives your relationship a better chance of survival when you let your ex come to his own conclusions – instead of trying to convince HIM to take you back or give the relationship another shot.
First, take some time to figure out why the break up occurred. Was there something that changed in the relationship dynamic – either recently or gradually over time? Sometimes people get comfortable in their relationships and let certain things go without even realizing it – and all it takes to repair this problem is to discover what it is and make a positive shift in the right direction.

This means you have to take a close look at anything you might have done to make him want to distance himself from you. Were you getting a little demanding because you’d started taking him for granted? Did you “freak out” because you felt him starting to drift away and you panicked? If so, accept responsibility for your behavior so you can start to reverse the dynamic.

Once you know what went wrong, you need to find a way to make sure it doesn’t happen again. It’s easy to blame his annoying habits or lack of communication skills for any tensions between the two of you, but ultimately you’re responsible for your reactions to whatever he does. You’ll either have to find a better way to deal with it, or decide that he might not be the right guy for you after all.

DON’T reach out to him and tell him that you want him back at this stage. Odds are, he’s missing you too! Let him miss you and remember all the things that attracted him to you in the first place.

Next, take your focus OFF of him. When you take some of your focus away from him, it shifts your vibe – and often results in HIM being the one wanting to rekindle things! Instead of sitting at home wallowing in misery, get out and start doing all those things you’ve always wanted to do, but never had time for.

Buy a new camera and start improving your photography skills, start a new fitness routine, go out and meet some new people, or sign up for a dance class. It doesn’t really matter what it is, as long as it’s something that makes you feel amazing.

Sometimes we can become very focused on a man to distract ourselves from the problems in our OWN life. This is the perfect time to take “inventory” of your life and get things in order. The idea is to focus on becoming the best version of the person you were before you met your ex – and do this for YOU, not for him.
The moment he realizes you’re moving on with your life, he’ll likely start to see you in a whole new way. Let him remember what an incredible woman you are and see what happens!

For the next steps on how to reconnect your broken relationship, check out the articles below under “Related Posts.”

4 replies to "How To Reconnect Your Broken Relationship"